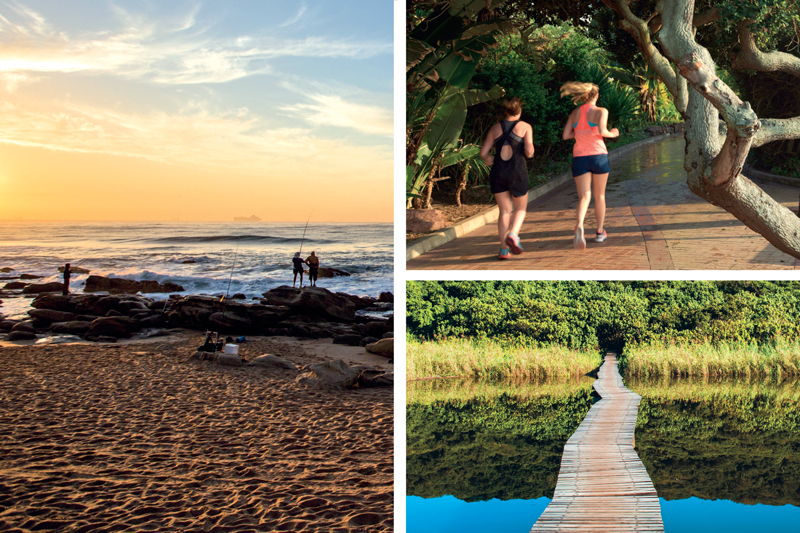 Despite its sophistication – its smart hotels, fancy mansions and slick apartment blocks – there’s still a sense of encroaching wildness here, a feeling of nature’s presence that makes it easy to slip into a relaxed reverie. It’s also the perfect base from which to explore the greater KZN area.

While uMhlanga really is the northernmost end of Durban’s urban sprawl, it was, in fact, once part of a coastal dune forest, and still maintains a close connection with nature. From just in front of Beverly Hills hotel, uMhlanga’s O’Connor Promenade runs parallel to the beach, connecting to a remnant of the forest at the northern end of the strip. It’s a great place for a walk – the uMhlanga Lagoon Nature Trail comprises boardwalks through a protected part of the forest, and crosses the Ohlange River towards the uMhlanga Lagoon; besides abundant bird life, there are monkeys, little blue and red duiker, and raptors overhead.

There’s a lot one can do here aside from soaking up the sun, warm sea and laid-back tropical vibe: From Virginia Airport
(in nearby Durban North), a number of light aircraft-charter companies offer scenic flights along the coast, spotting marine mammals from the sky or heading inland. There are choppers too, and BAC Helicopters offers a trip inland to scope the Valley of a Thousand Hills from the sky, before landing on a mountaintop for a romantic breakfast picnic with bubbly.

For an urban buzz

Much of uMhlanga’s appeal is that it’s easy to walk straight up from the beach to the heart of the village, where there are cafes, restaurants and just enough shops to avoid turning your seaside getaway into a shopping spree. If you need a gearshift, though, it’s worth driving into Durban, just 15 minutes south of uMhlanga for some people-watching.

All this happens against a backdrop of people splashing in the public pools, funfair carousels going round, and red bucket seats on cables sailing overhead. You may glimpse acolytes of the Nazarite church being baptised in the sea, or Hindu devotees tossing offerings out into the water – both symbols of Durban’s wondrous multiculturalism.

If you have children in tow, they’ll no doubt drag you to uShaka Marine World, a world-class aquarium where you can ogle cute penguins, watch seals demonstrating their intelligence, dive with sharks from within the safety of a clear-walled glass tube, or walk on a simulated ocean floor among rays and sand sharks. It can get packed during school holidays, with screaming children galore queuing for the slides at the adjacent Wet ‘n Wild water park, but grown-ups can sink cocktails at moyo uShaka Pier Bar, a glass-walled pagoda 100 m out to sea at the end of a pier, idyllic at sunset. 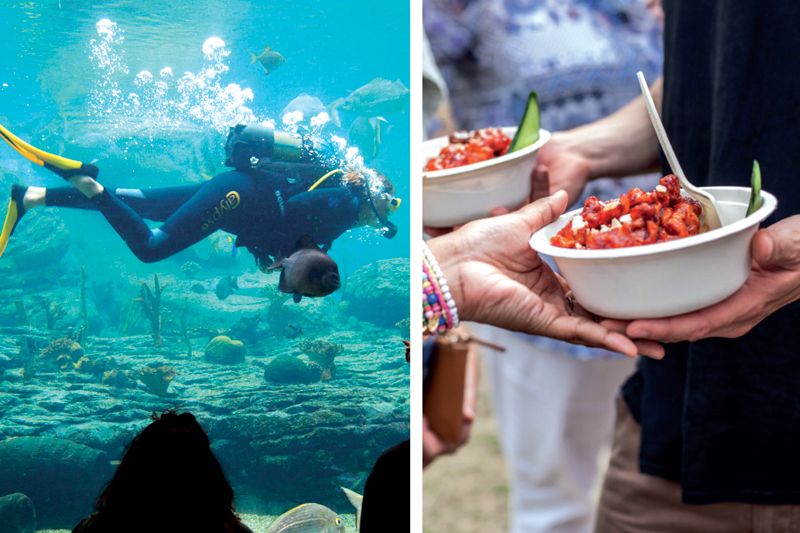 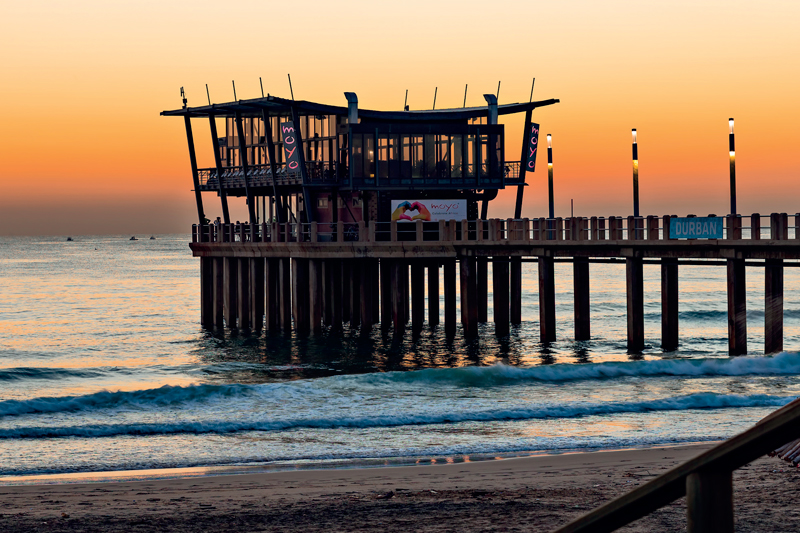 For a weekend buzz that doesn’t involve the beach, try one of the food markets that have mushroomed across the city. The tiny-but-lively Station Drive precinct hosts a festive First Thursdays jol, and the I Heart Market on the lawns adjacent Moses Mabhida Stadium delivers pop-up shops, food trucks and fine artisanal produce on the first Saturday of each month (9 am–2 pm). Afterwards, if there’s a soccer game happening at the stadium, go watch! The atmosphere is unrivalled. No scheduled match? Try the world’s tallest bungee swing, which requires you to leap from the stadium’s basket-handle-shaped arch right above the soccer pitch. If scrums are more your thing, rugby matches at neighbouring Kings Park stadium can be a real treat too – Durban’s Sharks’ fans support with near-fanatical fervour.

Finally, for a good time after dark, head to the Point, a docklands area that once heaved with sailors’ taverns and colourful inhabitants, but is now completely reinvented. The go-to spot is The Chairman, a jazz lounge carefully put together with mismatched furniture scattered through a maze of beautiful rooms where the city’s finest hang out.

If you’re more serious about disconnecting from the bustle, use uMhlanga as a springboard to the North Coast’s more northerly reaches. Dotted along the seaboard just beyond bustling Ballito are quaint holiday hamlets such as Shaka’s Rock, Salt Rock and Sheffield. Each has its own charm and easy access to a wide-open beach – just keep an eye open for the lifeguards, and swim between the flags, as tides are unpredictable. Tidal Tao offers snorkelling safaris at various rock pools between Ballito, Salt Rock, Sheffield and Christmas Bay, introducing people to incredible colourful octopuses,
fish, nudibranchs and plenty of critters that haven’t even officially been discovered yet.

On the edge of Salt Rock is The Litchi Orchard, a sugar cane, macadamia and litchi farm that hosts a couple of monthly markets (during the day on second Saturdays, and a night market on last Fridays). Aside from fresh produce and lovely meals, there’s music, a rustic pub serving craft beers and a coffee roastery.

Further up the coast, Mtunzini is a village that declared itself a conservancy years before ‘conservation’ became a buzzword. Although its roads are tarred and there’s an ATM, there’s no shopping centre and no traffic lights – a big part of village life is the reality of having zebras that freely roam the streets, saunter across the school fields and golf course and, every now and then, end up at the shop. The village is practically an extension of Umlalazi Nature Reserve, where the Mlalazi River spills into the ocean and birders gather from around the world to see Narina trogons, green barbets, finfoots and rare palm nut vultures that live in the protected raffia palm forest.

There’s a boardwalk through the forest, and it’s fascinating exploring at night when crabs scuttle about the mangrove swamp. On the river, there’s canoeing, launches for deep-sea fishing and barges that head out at sunset for a bit of a booze cruise. The Mtunzini Country Club is another huge part of village life – it has great views, good food and
a 9-hole, 71-par golf course that’s considered challenging because it’s so hilly. 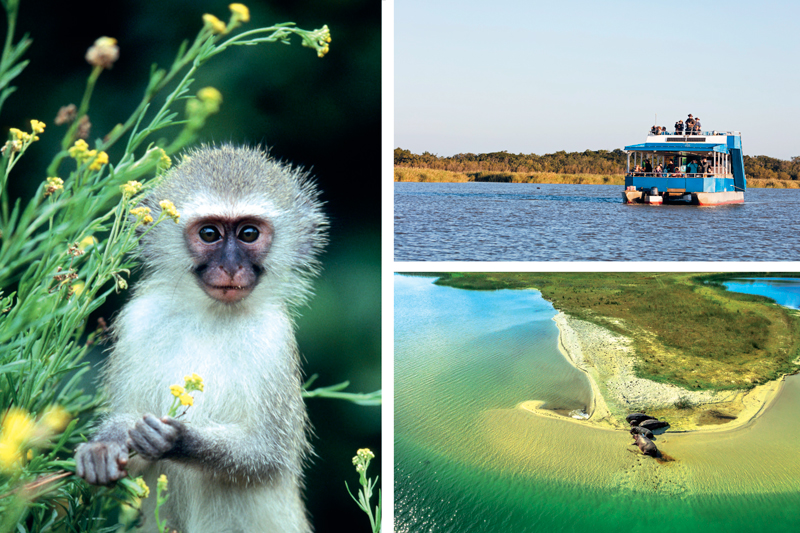 Things get wilder still when you head all the way into the protected areas of iSimangaliso Wetland Park, the UNESCO World Heritage Site that stretches for 220 km along the coast, incorporating the St Lucia Estuary, Sodwana Bay and a little-known paradise known as Mabibi in Maputaland, which reaches as far as the Mozambican border.

The Park is a rich and varied patchwork of coral reefs, immense sandy beaches, interconnected lakes and wetlands webbed with reed and papyrus. It incorporates Africa’s largest estuarine system, most of South Africa’s surviving swamp forests and 25 000-year-old dunes. Rare turtles nest here; dolphins, migrating whales and whale sharks teem off-shore; and among its 526 bird species are flamingos and large breeding colonies of storks, herons, pelicans and terns. After dark, you hear owls, nightjars and bushbabies, and if you don’t watch where you’re going at night, you could run into grazing hippos. Even in the little tourist village of St Lucia, you are on the fringe of incredible wildness with magnificent dune forests and crocs basking on the banks of the estuary.

If you want a more traditional safari experience that includes the big cats, ellies and rhinos, you can make a foray into Africa’s oldest declared nature reserve, Hluhluwe-iMfolozi Park – or head for nearby uMkhuze Game Reserve. And if you want to see below the water’s surface, Cape Vidal is a popular escape for snorkelling, while Sodwana is heralded globally as one of the world’s finest dive spots, with plenty of scuba operators vying to take you out by boat.

For total isolation, though, head farther north still, to the extremes of Maputaland where you need to work your way through thick forest to reach incredible beaches that stretch on, well, forever. You will feel as though you’ve fallen off the map as you find the ideal antidote to modern life: patches of paradise without cellphone coverage and no chance at all of WiFi getting between you and blissful nothingness. 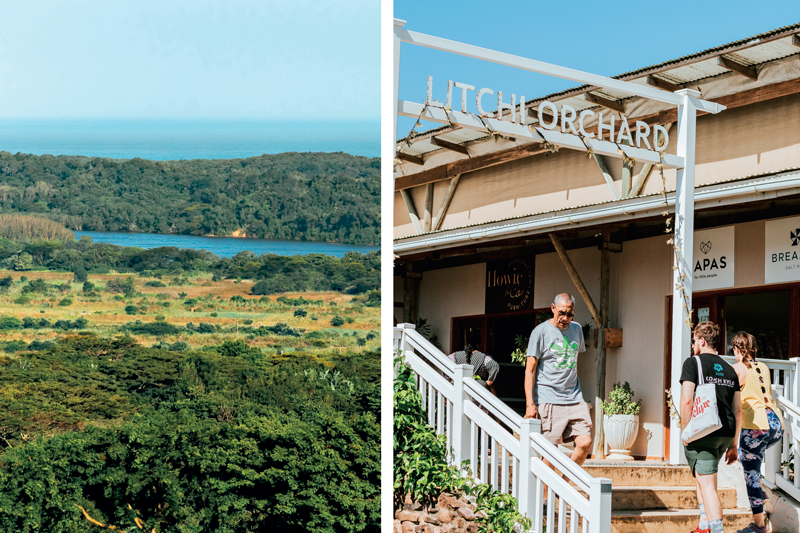