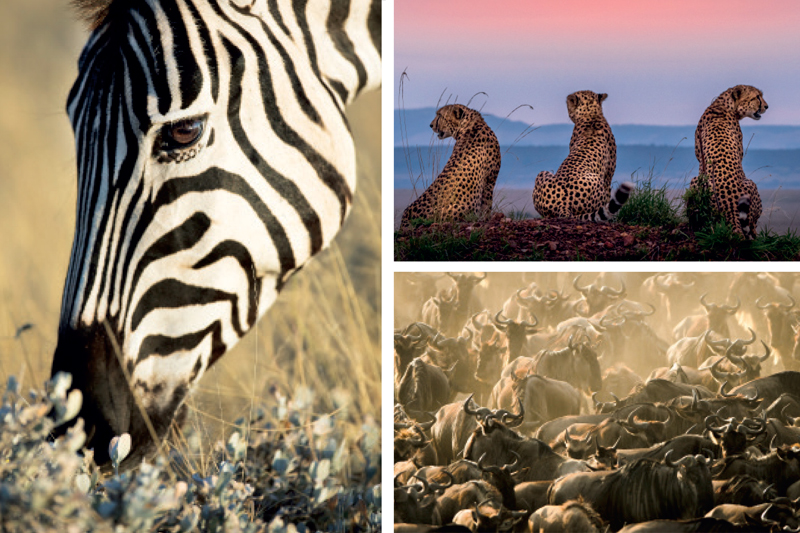 When it comes to tourist attractions, Kenya is unfairly blessed. As a safari destination, the country is second to none. But it also boasts pristine highlands and shimmering lakes, as well as bustling cities and intoxicating cultures. Not to mention a long and proud history, which goes all the way back to the dawn of humankind, as I found out on a recent exploration of some of its inland highlights…

Sure, the Maasai Mara may be the most popular, crowded and expensive of all Kenya’s game reserves, but 30 minutes into your first game drive, you’ll understand why. There simply is nowhere else like it – period. The vast expanse of uber-nutritious grassland supports an enormous population of herbivores, and these, in turn, attract the whole gamut of African predators. Ridiculous though this may seem, the Maasai Mara actually has more big cats than it has trees
… which makes spotting game ridiculously easy.

If at all possible, you should try to visit between July and October when around a million migrating wildebeest and thousands of topis, zebras and other animals pour into the reserve from Tanzania. Prices for lodges skyrocket during this time – but you won’t hear anyone who’s witnessed The Great Migration (aka The Greatest Show on Earth) complaining.

The Maasai Mara is without equal, but Kenya has several other world-class reserves. Nestled on the Tanzanian border,
the Amboseli National Park offers the unique experience of viewing the big five in front of the iconic backdrop of
Mt Kilimanjaro. Amboseli is particularly well known for its enormous population of elephants, but it’s also home to all
the other usual suspects. What’s more, it’s one of the best places to immerse yourself in the incredible warrior culture
of the enigmatic Maasai people, with visits to traditional villages easily arranged.

Off limits to the public for many years, the Samburu National Reserve is a pristine system of fauna and flora in central Kenya. Named after the Samburu, who still live on the park’s fringes, and dominated by the Ewaso Ng’iro River, which brings life to this otherwise arid region, it positively teems with elephant, buffalo, leopard and lion. Movie buffs will be intrigued to note that Samburu was one of the parks where George and Joy Adamson raised Elsa, the lion cub whose story is told in the Hollywood blockbuster Born Free. 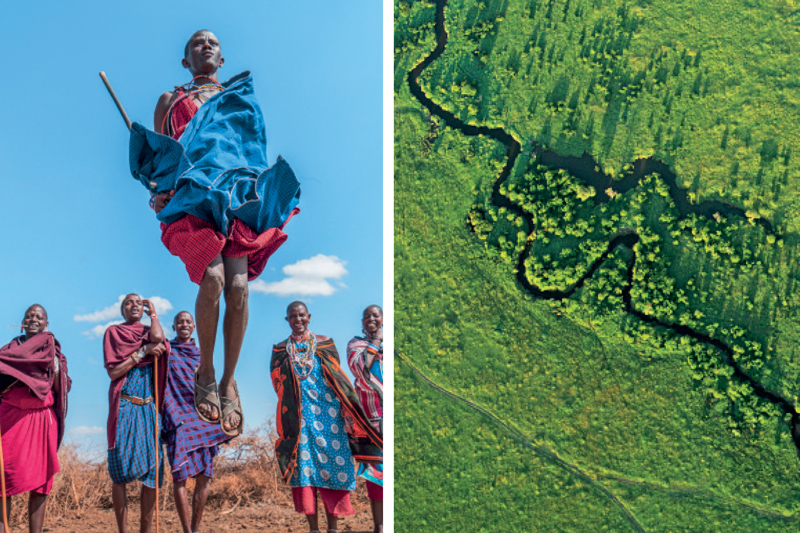 Kenya’s capital, Nairobi, is much more than a stopover. Go back in time with a visit to the Karen Blixen Museum – housed in the evocative colonial farmhouse that the Out of Africa author called home – before engaging with architecture of an entirely different stripe at the unashamedly Afro-modernist Kenyatta International Convention Centre in the heart of the city. Epicures are also spoilt for choice: Talisman, voted the city’s best restaurant by The New York Times, boasts an innovative, self-assured menu inspired by the diversity of the African continent, while perennial favourites Carnivore and AA Mithaiwalla specialise in meat (lots of it) and traditional Indian cuisine, respectively.

Animal lovers will find plenty to do on the outskirts of the city. The Nairobi National Park has four of the big five despite being only 7 km from the centre of town, while the nearby Giraffe Centre will allow you to rub noses – literally – with these gentle long-necked beasts. Meanwhile, on the other side of the park, the David Sheldrick Wildlife Trust, the most successful elephant orphan centre in the world, is an absolute must-see (who can resist a baby elephant?).

The central plateau surrounding Nairobi boasts temperate climes, dazzling Rift Valley lakes and the giddy heights of Mt Kenya, Africa’s second-highest peak. Lake Nakuru National Park is famous for its vast flocks of flamingoes, which can number 1.5 million birds in a good year (climate change hasn’t been kind to the birds). The flamingoes are drawn to the lake by a special type of algae that thrives in its alkaline waters, but they’re not the only creatures attracted to it: The park is also home to one of Kenya’s largest populations of rhinos, and it has lions and leopards too.

Mt Kenya may not be quite as high as Mt Kilimanjaro, but this means that it sees far fewer tourists and remains virtually untouched. If you’re feeling really intrepid, you can climb one of the three summits (these vary in difficulty, but all three are tougher than Kilimanjaro), but there’s plenty to do at the base of the mountain too. With forests, lakes, glaciers and caves, the scenery is quite unlike anything else in Kenya, and there’s incredible bird- and plant life too, as well as elephants, monkeys and the occasional leopard. 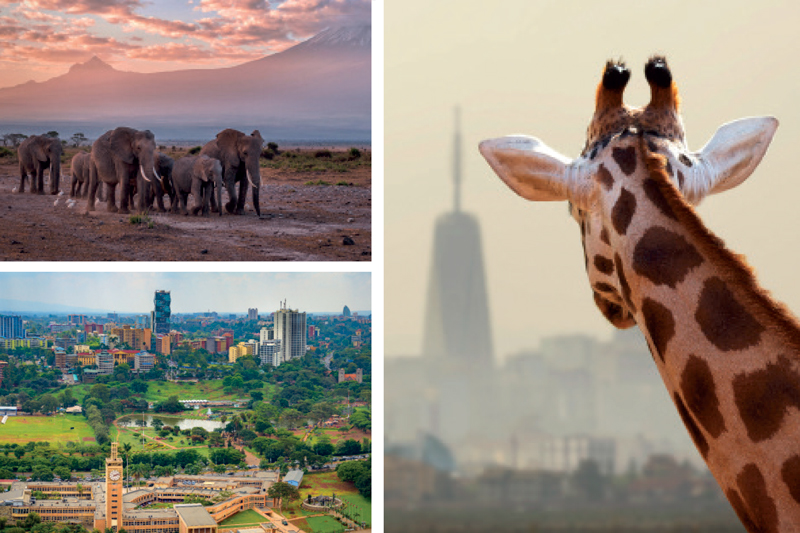 The western regions of Kenya are the epicentre of the Great Rift Valley – one of the most incredible geographical phenomena on the planet, and most likely the birthplace of Homo sapiens. The Rift Valley is characterised by dramatic escarpments and mighty lakes. Lake Victoria, at the intersection of Kenya, Uganda and Tanzania, is the largest lake in Africa (and the second-largest in the world), and its humid shores harbour bustling cities, forgotten national parks and tranquil islands.

That said, if it’s true adventure you crave, there’s nowhere better than Lake Turkana, which is the most incredible and inhospitable place I’ve ever been, not to mention an extremely important site in the history of humankind. Its rocky shores are devoid of plant life, its waters are crammed with thousands of crocodiles, and strong winds come up in the heat of the day. But the fishing is great, the enigmatic Turkana tribesmen are fascinating and the sunsets are out
of this world. I don’t think I’ll ever forget the first time I glimpsed the shimmering Jade Sea, and you won’t either.

For many, the real highlight of the Mayfair is its lush, expansive and impeccably maintained gardens, not to mention the two inviting swimming pools. Whether you spend your time marvelling at the profusion of bird life or simply relaxing by the pool with a good book and a cold drink, the hotel’s outdoor spaces are the perfect antidote to the hustle and bustle of Kenya’s capital. Moving inside, the well-appointed rooms (most with gorgeous garden views) meld Out of Africa flair with top-notch finishes. The Oasis Restaurant offers fine dining – try the coconut-crusted red snapper – in a casual setting, and the adjoining poolside terrace is the perfect spot to enjoy a light meal (chicken, avocado and mango salad anyone?) and that hard-earned G & T. There’s also a familiar Spur steakhouse on the hotel grounds – a great option for adults and kids alike.
tsogosun.com/southern-sun-mayfair-nairobi 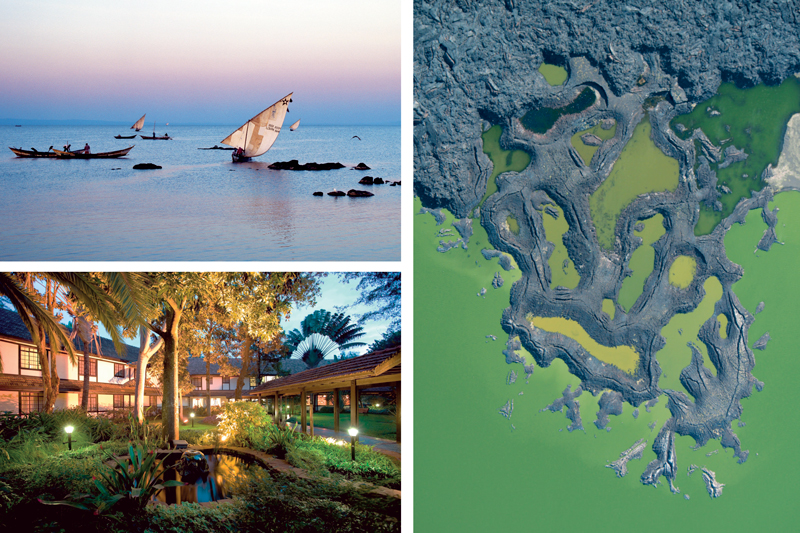