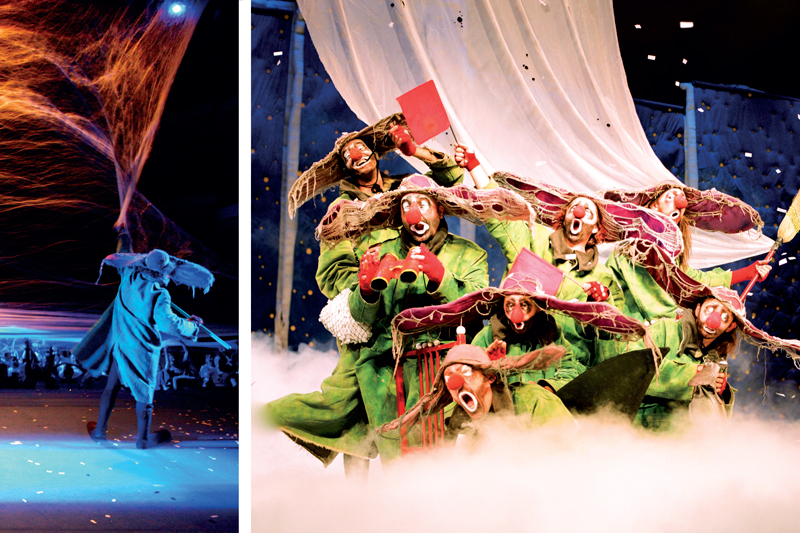 It is no exaggeration to say that history hangs on the walls at the newly refurbished, freshly rebranded Southern Sun Rosebank hotel – old, framed newspaper clippings decorate the hotel’s popular The Grill Jichana restaurant. They tell tales of how the hotel started life in 1932 as an iron-roofed, two-storey brick building with separate bungalows; of how the hotel stoep was one of northern Joburg’s most popular meeting places; and of how the hotel was rebuilt in 1975 as ‘a seven-storey comfort zone for the enjoyment of local and international guests’.

This year marks a new chapter in the hotel’s fabled history, as what was more recently known as Crowne Plaza – The Rosebank joins Tsogo Sun Hotels, with a new look and a new name, Southern Sun Rosebank, to go with it. Tsogo Sun Hotels’ Operations Director Andrew Hosking explains the strategy behind it: ‘We saw an opportunity to extend the well-known Southern Sun brand into the Rosebank node,’ he says. ‘This refurbishment was the perfect time for us to rebrand the hotel and align it with the full service collection of Southern Sun hotels.’

‘Southern Sun is a very strong South African brand,’ adds CEO Marcel von Aulock. ‘What we’ve done at Southern Sun Rosebank is a rebrand, a refurbishing, and a relaunch for a hotel that’s been in its current form for nearly 50 years, and has been a Rosebank landmark for even longer.’

Changing the hotel’s brand provided Tsogo Sun Hotels with an opportunity to make changes to the property’s interior as well. ‘For starters, we wanted to get the look and feel of the lobby area right,’ Marcel explains. ‘When you change a hotel’s brand you have to do something with it. You can’t just change the sign on the door!

General Manager Madeleine Roux agrees: ‘The hotel has a new reception area, and a completely refurbished lobby with a contemporary new look,’ she says. ‘The old Circle Bar used to be closed off with massive wooden doors, but those doors have been removed and the Circle Bar refurbished so that the bar is an extension of the lobby, and the lobby an extension of the bar.

‘We’ve created public spaces where guests can come out of their rooms and sit and work and relax,’ Madeleine continues. ‘My brief to the design team was, “If you’ve just been on a 22-hour flight from the United States, when you walk in here you must feel that you are in a place where you can take your book, sit on a couch, put your feet up and relax.”’

Nick Human, managing director of LLP Design, and his team were eagerly up to the task. ‘The public spaces have been rejuvenated to evolve and not destroy the DNA of the facility, but at the same time creating a desirable showcase for the change of brand,’ he says. ‘From the reception area, with a monotone-graphic metallised map of Rosebank, to the many pieces of original artwork (many specially commissioned) deliberately placed to create interest and thought, the hotel reflects on the proximity to Johannesburg’s “Art Mile” and the inhabitants who have migrated to the city. 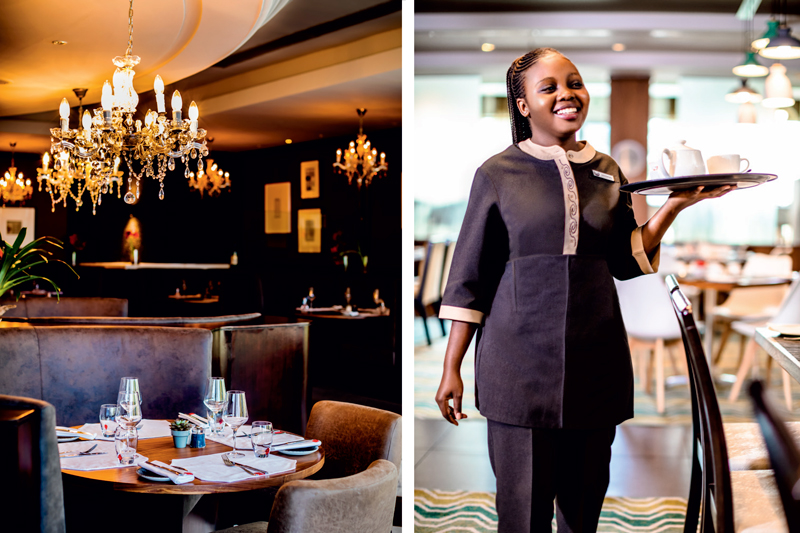 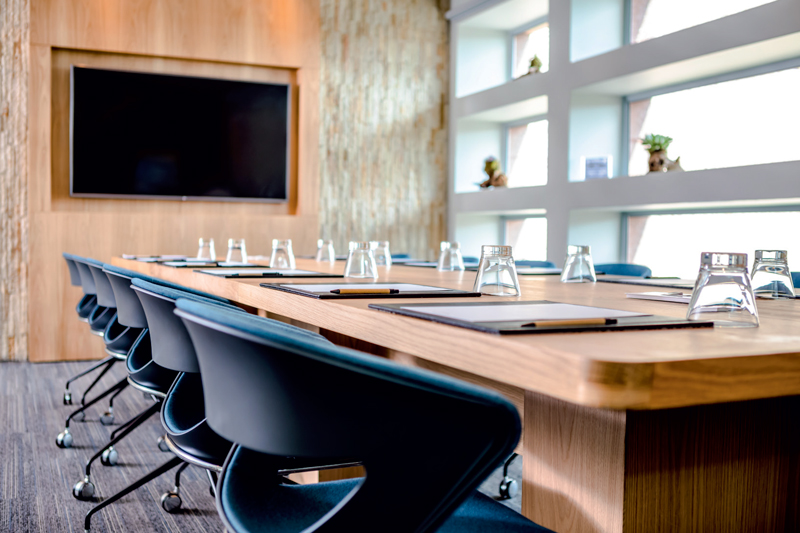 If the old hotel was lacking anything, it was a restaurant space that flowed between the indoors and outdoors. That gap has now been filled, in a manner, by The Grill Jichana. Based on the highly acclaimed restaurant of the same name at Southern Sun Elangeni & Maharani, The Grill Jichana is infused with the flavours of the African East-Coast spice route.

‘The Grill Jichana is not a steakhouse or a grill house,’ says Madeleine. ‘While it is a grill restaurant – with flame-grilled premium cuts from the best local producers – it also gives us the scope to introduce a multitude of flavours. We know that people’s eating habits have changed, and if you have a group of people with varied palates, we’ll cater to that.’

‘It’s a steak-grill-house seafood restaurant with a difference, bringing in the tastes of East Africa and the west coast of India,’ says Marcel. ‘We wanted to bring the concept to Rosebank to tap into the local restaurant patronage, which is very vibey.’

‘Vibey’ is a word you’ll often hear associated with Rosebank. ‘It is a lovely area,’ says Madeleine. ‘It’s safe, trendy, very arty … and there’s a mix of old and new coming together. We have seen a lot of new apartment blocks going up around us, so it is a prime location.’

‘Rosebank is booming,’ adds Tsogo Sun Hotels COO Ravi Nadasen. ‘The opening of the Gautrain station in 2011 spurred growth into the precinct, making it a favoured destination of investors and residents with its vibrant mixed-use commercial, retail, entertainment and residential offerings.’

Southern Sun Rosebank will add to that vibe, with its bustling lobby, its meeting rooms and conference facilities, and its meet-after-work bar and restaurants. ‘The hotel was built around a courtyard, so you had a lot of internal spaces,’ says Marcel. ‘We’ve created an outdoor space where people can now enjoy the sunshine as well. That’s a feature of Southern Sun hotels. Think of Southern Sun Hyde Park, Southern Sun The Cullinan, Southern Sun Montecasino … they all have these great decks and outdoor meeting areas. That’s what we wanted at Rosebank too.’ The folks who used to hang out on the old hotel stoep would be happy to hear that.

Despite – or maybe because of – the refurb, there’s a strong sense of history around Southern Sun Rosebank. The first phase of the work covered the lobby and The Grill Jichana, with the balance set to take place over the course of 2020 and 2021, with minimum disruption to hotel operations.

It is certainly going to open the hotel up to a new market. ‘We haven’t had a core Southern Sun brand hotel in Rosebank before,’ says Marcel. ‘I’m very excited about this. The property has been part of the Tsogo Group for a couple of years, so I’m delighted that we’re now able to put our own stamp on it.’

Madeleine, meanwhile, goes back to the hotel’s proud heritage: ‘This old lady has been here for 45 years – or even longer than that if you go back further,’ she says as she walks through the new lobby. ‘The old Rosebank Hotel was one of the top hotels in Joburg back in the day. So she’s been here for a long time, and now – as Southern Sun Rosebank – we’ve given her a new lease on life and another opportunity to shine.’ 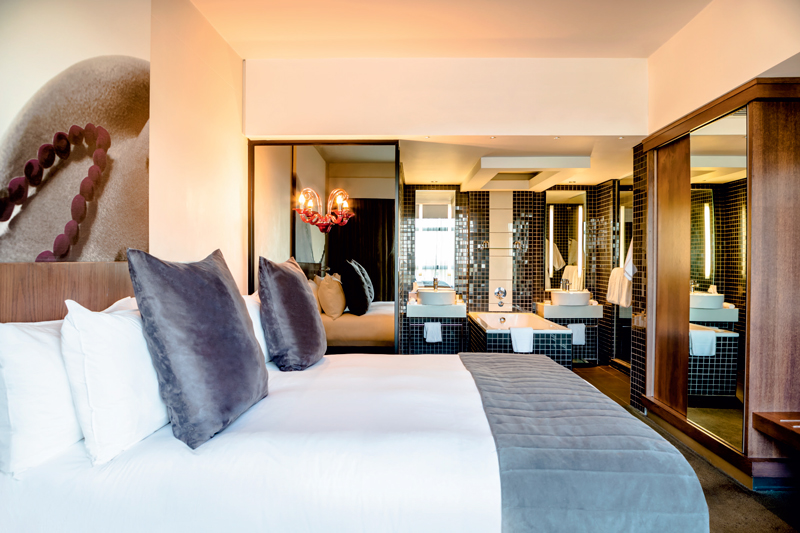 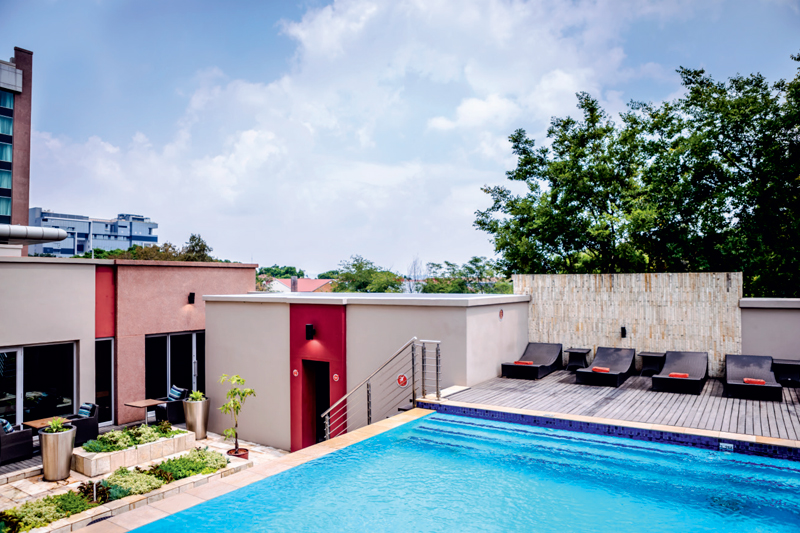