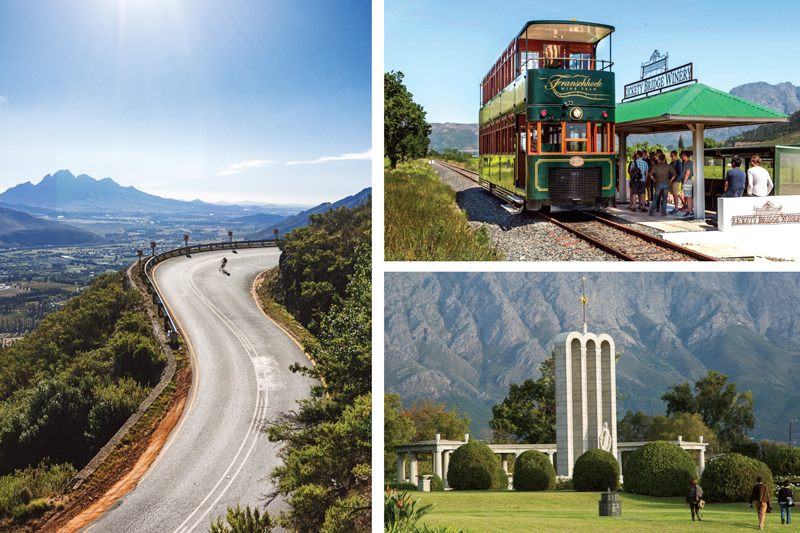 The chic town in the Cape Winelands truly offers European sophistication under sunny African skies, with its elegant main street lined with galleries and its wineries watched over by soaring peaks. Resplendent

with whitewashed Cape Dutch architecture and gourmet restaurants, Franschhoek is a refined treat. But how did the ‘French Corner’ develop in this scenic part of the Winelands, with its tasting tram rattling between the vineyards, dams and mountains? The story goes back to 1687, and several clues can be found on the mountain passes that bring quaffers and epicureans to Franschhoek.

Driving to Franchhoek from Stellenbosch takes you over the Helshoogte (‘Hell’s Heights’) Pass, which was forged by elephants and later reportedly named by weary ox-wagon drivers. This mid-19th-century pass linking two of South Africa’s oldest towns was part of the European expansion out of Cape Town, following the city’s establishment as a refreshment station for Dutch East India Company ships. Farmers used the summit of this scenic pass between the Simonsberg and Jonkershoekberge as a lookout to spot hungry ships sailing into the distant Cape Town harbour.

Arriving in Franschhoek from Paarl also takes you past the Simonsberg, its muscly sandstone flanks shrouded by a green haze of indigenous fynbos and renosterveld. Like Stellenbosch, the mountain is named after the first Cape governor, Simon van der Stel; locals say its outline resembles the Stellenbosch founder sleeping off a long tasting. It was Van Der Stel who led a group of 23 pioneers to establish farms along Franschhoek’s Berg River in 1687, setting the scene for the arrival of 176 French Huguenots the following year. Two sites of interest tell the story of these persecuted Protestant refugees at the eastern entrance to town, where the Franschhoek Pass begins its ascent to the 48 km² Theewaterskloof Dam, which is Cape Town’s water supply. The appropriately elegant Huguenot Monument and adjacent Huguenot Memorial Museum celebrate Gallic contributions to South Africa, including the Huguenots’ famed winemaking skills. Although the French language died out here, the Huguenots’ memory endures everywhere from Afrikaner surnames (FW de Klerk, or Charlize Theron) to the names of local wineries such as Grande Provence.

Established in 1694, Grande Provence has a winemaking heritage older than many European estates, which you can experience beneath the exposed beams of its contemporary tasting room. Its reds, whites and rosés, divided into three ranges, include the Winelands’ signature varietals of Chenin blanc and Pinotage. The latter, a robust red with an earthy, smoky and fruity taste, was bred locally in 1925 as a cross between Pinot Noir and Cinsaut. Grand Provence is also one of more than 35 wineries on the Franschhoek Food & Wine Route offering drop-in tastings (download a map from franschhoek.org.za or pick one up from the tourist office), one of several visited by the hop-on, hop-off Franschhoek Wine Tram (winetram.co.za) and one of many lining Route 45 into town. 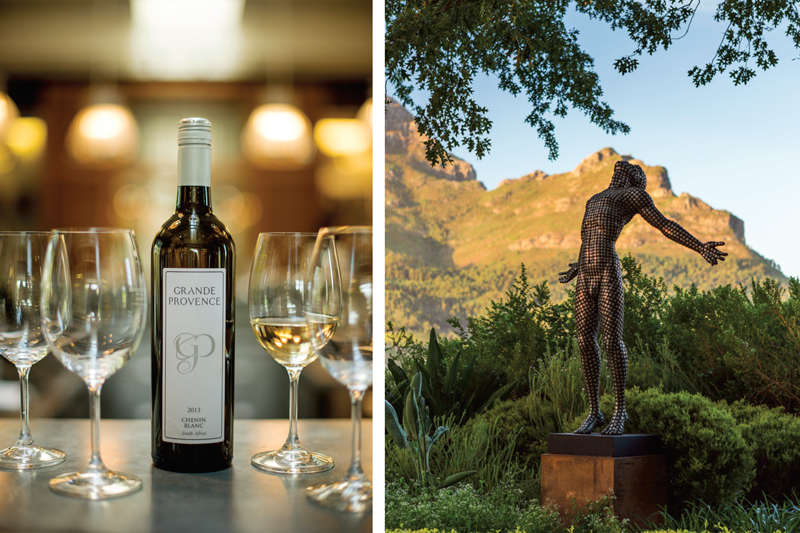 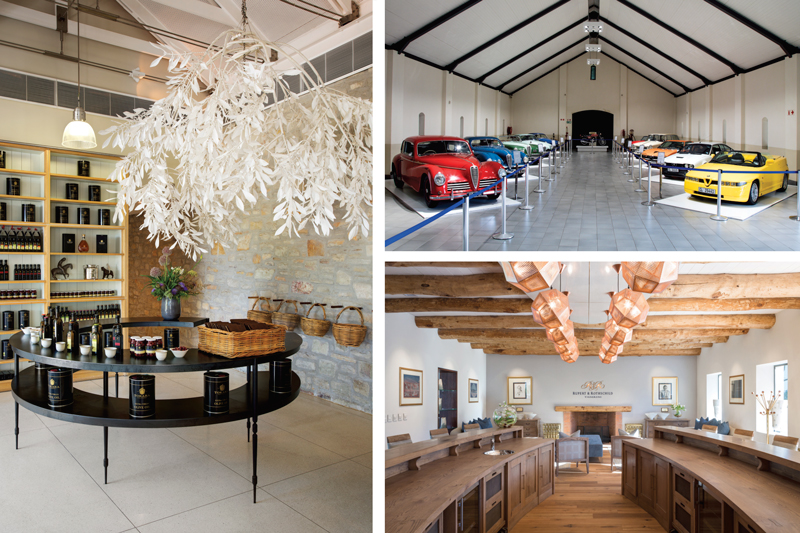 Coming from Stellenbosch, the first roadside haven you’ll pass is Delaire Graff Estate, which enjoys sweeping views from atop Helshoogte Pass. Like many of the prestigious properties flanking the pass as it descends into the Franschhoek Valley, this estate owned by British jeweller Laurence Graff has bolstered its exquisite vinos and vistas with culture and gastronomy. Delaire Graff’s gallery displays the world’s most widely reproduced and familiar artwork – not the Mona Lisa, but the kitschy Chinese Girl (1952) by Russian-South African artist Vladimir Tretchikoff. The estate’s eponymous restaurant is led by Kevin Grobler, previously head chef at JAN restaurant in Nice, which earned a Michelin star for introducing the French palate to South African dishes.

With numerous local wine farms boasting centuries of Huguenot-inspired viticulture and shelves of industry awards, many choose to differentiate themselves through their tourist-friendly add-ons. For example, Delaire Graff’s neighbour, Tokara, is home to a deli, restaurant, art gallery and sculpture garden, and you can taste their cold-pressed, extra virgin olive oil as well as their award-winning wines. Continuing towards Franschhoek, Zorgvliet and Allée Bleue are both excellent options for families, with gourmet picnics and jungle gyms allowing for long, lazy afternoons whiled away among the oak trees and Cape Dutch gables.

Swapping the biltong and brie for Bentleys and Bugattis, the nearby Franschhoek Motor Museum displays billionaire Johann Rupert’s vintage car collection, which you can combine with a tram ride on the adjoining Anthonij Rupert Wine Estate. The experiences at the latter range from high tea to pairings of Shiraz and charcuterie, nougat and MCC (Méthode Cap Classique) bubbly or Italian cheese and four estate wines. Next door to the Huguenot Memorial Museum, fans of fizz will also enjoy a flute at MCC-producing Le Lude, optionally accompanied by canapés, a cheese platter, or a lovely morning or afternoon tea.

Investment in the Valley

The Stellenbosch-based Rupert family is also behind Franschhoek’s La Motte and, with another Forbes-listed dynasty, Rupert & Rothschild Vignerons. La Motte in particular is worth a visit, its offering including a display of modernist South African landscapes by the great Jacob Hendrik Pierneef, sculpture- or history-focused guided walks, a farm shop, hiking trail and Pierneef-inspired restaurant.

Richard Branson is another mogul seemingly trying to disprove the local joke that the way to make a small fortune is by investing a large fortune in a wine estate. Mont Rochelle, a 39-hectare winery and luxury hotel perched above town, joined Necker Island in the Virgin Limited Edition collection in 2014. However, few estates can compete with the creativity and bucolic appeal of Babylonstoren, the 17th-century farm owned by Naspers chair Koos Bekker. It offers a trip back in time to the area’s pastoral origins, with a Cape Dutch kitchen garden evoking Company’s Garden in Cape Town’s bygone refreshment-station days. You could spend a day wandering the paths between succulents and citrus, tasting the wines, browsing the farm shops and eating in the greenhouse garden cafe, bakery or Babel Restaurant.

Boschendal is a similarly multifaceted experience with an eye on local heritage, offering a deli, popular picnics, garden walks and mountain-biking trails on a leafy 17th-century Cape Dutch estate. If somewhere smaller and more relaxed sounds more appealing, options include Môreson, where the Miss Molly brut is the perfect accompaniment to the mountain views.

An air of refinement runs through the Franschhoek Valley, but, with activities from the tourism routes (franschhoek.org.za) to simply browsing on the main drag, it offers days out to please connoisseurs and casual tasters alike.

Tsogo Sun Hotels recently spent more than R1 million at the Cape Winelands’ two most prestigious wine auctions, securing premium local wines for its guests’ enjoyment. The group was one of the top three buyers at the Nedbank Cape Winemakers Guild Auction, which showcases wines made exclusively for the 35-year-old auction by South Africa’s top winemakers. It spent more than R500 000 on 10 exceptional wines by estates including Grangehurst, Edgebaston, Spier and De Grendel, and was the top buyer at the Cape Fine & Rare Wine Auction.

Historically the top bidder at both auctions, Tsogo Sun Hotels bought more than 20% of the 200 wines available in 124 lots at the latter auction, which is the local equivalent of France’s famous Hospices de Beaune and Germany’s Kloster Eberbach. This saw the group invest more than R420 000 in 146 cases of 16 different wines, including the Kanonkop Cabernet Sauvignon (1997), Eikendal’s limited-edition Infused by Earth Chardonnay (2016) and the Plaisir de Merle Cabernet (2008) made near Franschhoek.

The new purchases, predominantly the popular Chardonnay, Merlot, Cabernet Sauvignon and Sauvignon Blanc varietals, are available at selected Tsogo Sun Hotels destinations. Most are priced at less than R1 000 a bottle, and identified on Tsogo Sun Hotels wine lists by its ‘Collector’s Wine’ icon. The wines are also available to buy and take home from Southern Sun The Cullinan and Southern Sun Waterfront in Cape Town and Café Cru, Montecasino. 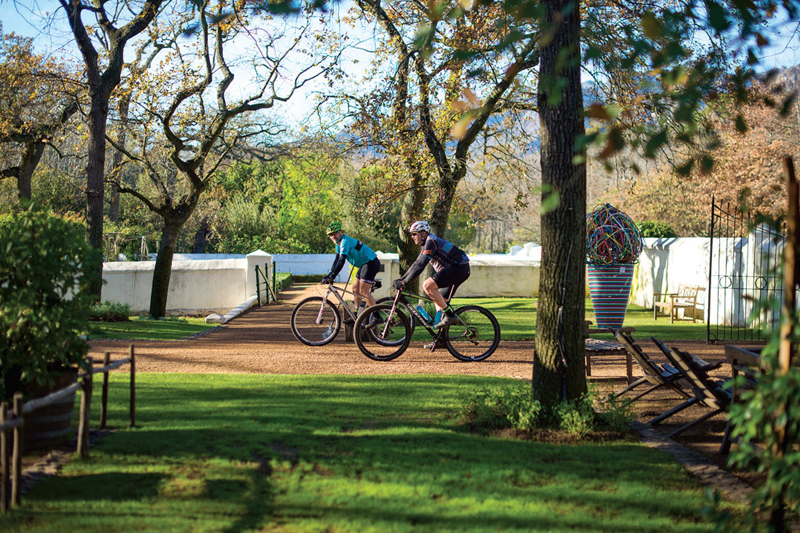