Nelson Mandela said that sport has the power to unite in a way that little else does. Over the past few months, we’ve witnessed the great man’s words in action.

The most diverse Springbok side in history overcame significant odds to win the World Cup in Japan. As Siya Kolisi thrust the Webb Ellis Cup into the cool Yokohama air, it felt as if the entire nation was rising at once. Kolisi – the first black African to lead the Boks in a World Cup final – made the point in the aftermath that the team had set out to give fans across a troubled and vastly complex country a reason to celebrate.

The response to Kolisi and coach Rassie Erasmus’ powerful statements was emphatic. Thousands of fans took to the streets to catch a glimpse of the Boks as they paraded through Joburg, Durban, East London, Port Elizabeth, Cape Town and even Zwide – the township where Kolisi grew up. Fans of different races and from different backgrounds linked arms and sang ‘Nkosi Sikelel’ iAfrika’ and ‘Shosholoza’ as Kolisi and his teammates moved past on an open-top bus. In the rural areas of the Eastern and Western Cape, children chased the bus for kilometres just to keep their heroes in sight.

The Boks could not have asked for a more powerful ending to their World Cup story. The team has, of course, endured more than its fair share of disappointment since the previous global tournament in England.

The 2016 season will be remembered as the Boks’ worst. The side slumped to historic losses to Ireland, Argentina and Italy, and suffered record defeats at the hands of the All Blacks and Wales. 2017 brought several more lows, with the Boks sustaining their worst-ever losses in New Zealand and Ireland. By the end of that season, it was clear that significant changes were needed across the board.

Erasmus returned to South Africa in late 2017, after a stint with Irish club Munster. The director of rugby took on the added responsibility of coaching the national side in early 2018. At that stage, the Boks were ranked seventh in the world and were no longer recognised as the most physical team in rugby.

Erasmus was open and honest about his plan for the side: He spoke about blooding new players and about recalling a clutch of veterans based overseas in the lead-up to the 2019 World Cup. Transformation as well as results, he said, would be a priority.

Erasmus proceeded to keep his promises. Kolisi made history when he became the first black African to lead the Boks, captaining the most diverse side in history against England at Ellis Park in June 2018. The team finished the 2018 season with a 50% win-record, and yet the 2–1 series win against England, as well as a rare victory against the All Blacks in New Zealand, suggested that the Boks were on the right track.

Erasmus continued to innovate in the lead-up to the 2019 season. Again, he was open about his plan to manage the greater squad over the course of the Rugby Championship and World Cup tournaments. The players were put through a gruelling conditioning camp. Erasmus then proceeded to manage the individual player workloads right up to the World Cup final itself.

The Boks won the truncated Rugby Championship tournament to claim their first SANZAAR title in 10 years. Despite the improvements made across that campaign, they travelled to the World Cup in Japan as underdogs. New Zealand, England, Ireland and Six Nations champions Wales were all expected to make a bigger impact than the resurgent South Africans.

Few – if any – expected the Boks to crack on and win the World Cup after they went down to the All Blacks in the Pool B opener staged in Yokohama. Kolisi, Erasmus and the rest of the group stuck to the plan, though, and proceeded to smash Namibia, Italy and Canada in the following weeks. It was during this period that Erasmus rotated his team, and the concept of the ‘Bomb Squad’ – a reserve contingent that included as many as six forwards and ultimately the opportunity to field a fresh pack late in the game – began to emerge.

The Springboks’ pragmatic forward and kicking strategy yielded the desired rewards in the quarter-final against Japan. Wales failed to deal with the Boks’ forward assault in the dying stages of the semi-final, and were duly knocked out of the title race.

Meanwhile, England advanced to the decider on the back of a magnificent performance against the All Blacks. The British press quickly installed Eddie Jones’ side as title favourites. While the South Africans’ physical threat was acknowledged, most felt that Erasmus’ team lacked the tactical variation to win a World Cup final.

The Boks proved the English – and much of the rugby world – wrong on what was an unforgettable night in Yokohama. The locals in the crowd, who had adopted the Boks as their second team since the South Africans’ arrival in early September, found their voice as Kolisi’s men drew first blood. There was no shortage of adventure and intelligence in the Boks’ approach. They alternated between running the ball and booting it upfield, and England struggled to keep them in check.

Wing Makazole Mapimpi made history when he became the first South African to score a try in a World Cup final. Cheslin Kolbe – one of the talismans of the Boks’ World Cup campaign – added his side’s second when he beat a host of defenders en route to the line. The final scoreline of 32–12 left no room for debate: the Boks had beaten England convincingly and were worthy world champions.

Kolisi made history when he became the first black African to lift the Webb Ellis Cup. The Boks became the first side to win the title after losing a game in the pool stages. They also became the first team in history to secure both the Rugby Championship and World Cup in a single year.

Unsurprisingly, they went on to scoop the Team of the Year accolade at the World Rugby Awards event held in Tokyo the following evening. Erasmus was acknowledged with the Coach of the Year prize, while flanker Pieter-Steph du Toit claimed the Player of the Year gong.

Erasmus has since suggested that the best is yet to come from this group. Most of the players who featured in 2019 will be available for the next four-year cycle. The Boks will host the British & Irish Lions in 2021. They will travel to the 2023 World Cup as the defending champs.

Kolisi, Malherbe, Pieter-Steph du Toit, De Allende, Etzebeth, De Jager, Pollard and Kriel should all go on to feature at their third World Cup. Balance is important in a World Cup squad, and South Africa should not want for young stars. Damian Willemse, for example, will be 25 when that tournament in France rolls round.

The Boks reached the pinnacle of world rugby this season. While they have the right personnel and systems in place at the highest level, they must continue to build and innovate in the years to come.

Erasmus has repeated this statement over and over in the wake of the recent triumph. His insistence that South African rugby has greater peaks to scale has been massively encouraging, as it highlights an unprecedented ambition. Erasmus wants the Boks to be the best in the world for a lengthy period of time – much like the All Blacks were between 2009 and 2019.

The recent victory could well be viewed as a triumph in isolation. No matter what happens in the coming years, Erasmus, Kolisi and the rest of the group will go down in history as World Cup winners.

However, going by Erasmus and Kolisi’s recent statements, one can’t help but feel that a new age of South African rugby has only just begun. 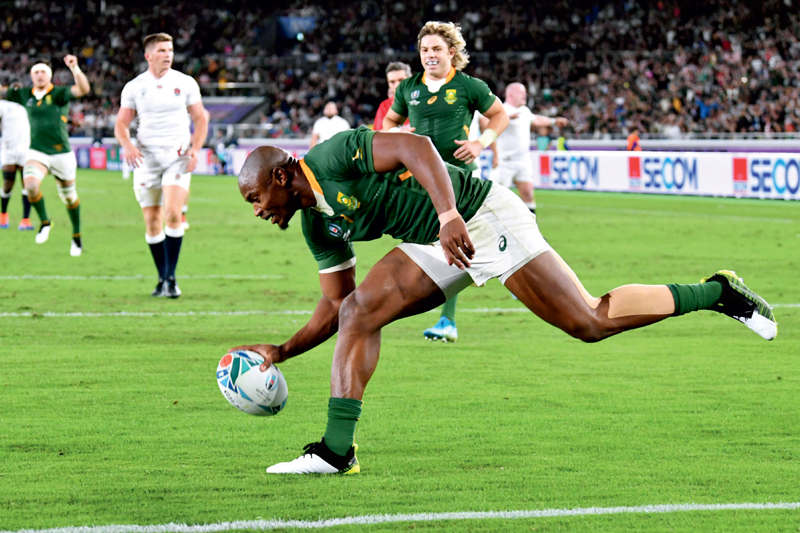 Kolisi raises ‘Bill’ to the heavens

In the wake of the Springboks’ 32–12 win over England, the players gathered on the winners’ podium, then leapt as one in celebration. After 12 long years, the Boks had reclaimed the most coveted trophy in the game.

Mapimpi’s try
Until the recent decider in Japan, the Boks were yet to score a try in a World Cup final. Mapimpi created the opportunity in the second half when he produced a chip kick over the England defence. The wing proceeded to follow the play and collect the final pass by Lukhanyo Am.

Pollard’s clutch penalty vs Wales
Credit should go to the forward pack in the final moments of the semi-final against Wales. In the end, however, the game was decided by a late Handre Pollard penalty. The Bok flyhalf held his nerve to nail a goal from the touchline and secure his side a 19–16 win.

Bok pack mauls Japan 50 metres
The Boks dominated most opponents at the set piece. The highlight of their mauling effort came in the quarter-final when they marched hosts Japan 50 metres downfield. On the back of that play, scrum half Faf de Klerk scored a game-clinching try.

‘Beast’ and co deliver scrum performance for the ages
The Boks destroyed England at the scrum in the final. Prop Tendai ‘Beast’ Mtawarira, playing in his last game for the Boks, hammered his direct opponent Dan Cole. The pressure applied by the South African collective resulted in a series of penalties and ultimately allowed the Boks to control the game.