Earlier this year, incoming coach Rassie Erasmus made a promise to restore the Springboks’ physical reputation. He vowed to pick a more representative side and, most importantly, to obtain some positive results.

The much-hyped three-Test series against England is now a thing of the past. A physically dominant Bok side claimed a 2-1 series victory over an England side that was until recently the No 2-ranked team in the world. Erasmus favoured a more transformed match-day squad across the June Tests, and handed a number of youngsters – there were 16 debutants in all – opportunities with the future in mind. It’s fair to say that several boxes were well and truly ticked.

The series will go down in South African rugby history for two more significant reasons. Siya Kolisi became the first black African to captain the Boks in a Test match when he led the side out  in the first game against England at Ellis Park. A week later, prop Tendai ‘Beast’ Mtawarira became the first black African to play 100 Tests for the Boks. Former Sharks and Bok wing Odwa Ndungane made the point recently that Kolisi’s elevation and Mtawarira’s milestone could be used as evidence of just how far South African rugby has come.

There has been much to celebrate for South African rugby fans these past few months. At the end of the series, England coach Eddie Jones praised Erasmus for orchestrating the Boks’ turnaround in fortunes. Jones said that the Boks, under the guidance of a more forward-thinking coach, will be contenders for the 2019 World Cup title.

No one of sound mind would have made such a statement at the end of last year. Under coach Allister Coetzee, the Boks won 11 out of 25 Tests; a run that included a number of record-breaking defeats. By the end of 2017, most were in agreement that South African rugby had hit rock bottom.

Fast forward to the present. The Boks have climbed a couple of rungs on the World Rugby rankings ladder, and will head into the Rugby Championship with some confidence and momentum. The team has rediscovered its physical mojo, and there’s a new buzz around its revamped attack.

The Rugby Championship, however, will be the true measure of progress for a side that’s fared poorly in the past two seasons. One can’t really look past the All Blacks – who have won six of the past eight Rugby Championship titles – as tournament favourites. The Boks will be determined to make an impact on a number of fronts, though, and to obtain some rare wins at home and abroad.

The Boks have enjoyed a lot of success against northern hemisphere teams in South Africa during the professional era. Indeed, while the past two years have witnessed a poor return overall, the Boks have still managed to claim convincing series wins against Ireland (2016) and France (2017) at home. Their away record over the past two seasons, however, has left a lot to be desired. The Boks have won only three of the 13 Tests staged overseas.

Argentina lost all three of their home Tests in June. There may well be an opportunity for the Boks to win their first two Rugby Championship Tests – both against the Pumas – and to start their campaign with a bang.

Beyond that, the Boks will have to produce something out of the ordinary to succeed where so many South African teams have failed in Australasia. They haven’t beaten the Wallabies in Australia since 2013, or the All Blacks in New Zealand since 2009.

The performances of the South African Super Rugby teams away from home this year have been nothing short of diabolical. The Stormers slumped to an inaugural loss to the Sunwolves in Asia, while several teams went down in Argentina. During the regular season, the South African sides combined for 12 losses in 14 matches played in Australasia. Erasmus will be hoping that those defeats haven’t scarred the Bok players who will be travelling Down Under for the Rugby Championship.

The Boks won two out of six Tests in last year’s tournament. An improvement on that record, and perhaps a second-place finish would signify progress. Erasmus should also be looking to develop his squad with a view to the 2019 World Cup.

The one-off against Wales and the three Tests against England in June provided the coach with some answers in terms of his personnel. A number of youngsters impressed, but veteran fly half Elton Jantjies failed to cope with the wet conditions and the pressure applied by England in the third Test at Newlands.

The high-pressure environment of the Rugby Championship will prove a sterner test of the players’ abilities. Individuals will be going all out to make a statement to the coach, and indeed the greater rugby community, just a year out from the World Cup.

Number 8 Duane Vermeulen, one of the stars of the series against England, has ruled himself out of this tournament due to new club commitments in Japan. The good news for the Boks is that veterans of the quality of Eben Etzebeth, Warren Whiteley, Coenie Oosthuizen, and 2017 SA Rugby Player of the Year Malcolm Marx have recovered from their respective injuries. The return of these players should aid the Boks in their quest to claim some big scalps.

Come the end of this year’s Rugby Championship, we should have a better idea of where this team stands and whether they are, as Jones suggested, in a position to challenge for the World Cup title in Japan next year. What the series victory against England proved beyond a doubt, however, is that the Boks are moving in the right direction. 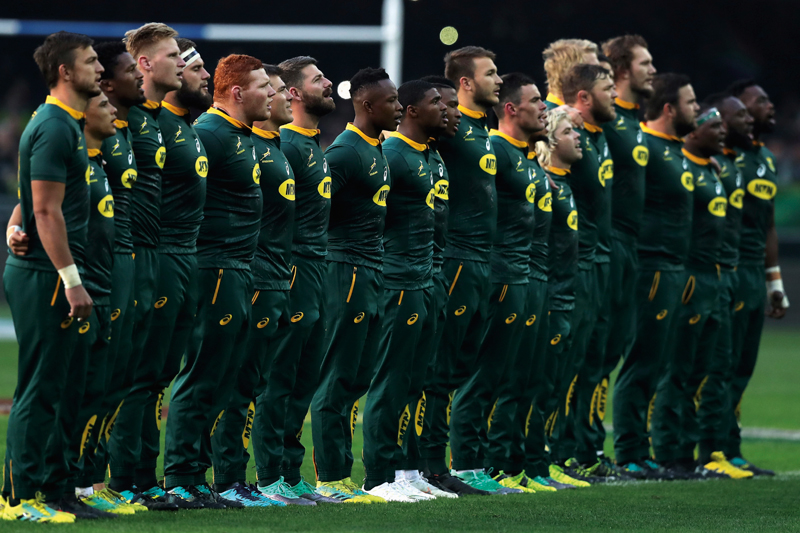 There’s been a lot of debate this year about Du Toit’s move from loose head to tight head prop. Springbok coach Rassie Erasmus has long believed that Du Toit is better suited to the latter position. Du Toit repaid his coach’s faith in him when he produced some powerful performances from the bench in the series against England. The 23-year-old will face a sterner test of his scrumming abilities, however, when he comes up against the Argentinians, Australians, and New Zealanders in the Rugby Championship.

Gelant has been a standout performer for the Bulls in 2018. The 23-year-old fullback was backed to start for the Boks against England in the third Test, and produced a solid performance under the high ball on a wet night at Newlands. The gifted attacking player has added a lot more to his game in the past season or so, and could have a key role to play for the national side in the lead-up to the 2019 World Cup.

Nkosi would have debuted for the Boks during the latter stages of 2017 if not for an injury sustained in the Currie Cup playoffs. The 22-year-old winger eventually received his chance in the first Test against England in Joburg this June, and made it count. Nkosi showed his pace as well as his range of skills in the lead-up to his two tries. However, his defence, and indeed that of the whole Bok backline, will require sharpening ahead of the more challenging games against the Wallabies and All Blacks.