Remember the moment when a black South African led the Springboks out on to the pitch for the first time? Remember when the Boks beat the All Blacks – arguably the most successful rugby team of all time – in their own backyard?

Indeed, the 2018 rugby season will be remembered by South Africans for at least two good reasons. New skipper Siya Kolisi made history when he led the Boks on to the field ahead of the first Test against England at Ellis Park in June, and subsequently received a Laureus Award for his ground-breaking achievement. Chiliboy Ralepelle became the first black African to lead the Boks in a tour match back in 2006. Kolisi, however, broke a barrier that had stood for 127 years when he captained the South African team in a Test for the first time. Another significant ceiling was shattered in that series against England when Tendai ‘Beast’ Mtawarira became the first black African to play 100 Tests.

The team left its mark when it downed the All Blacks 36–34 in Wellington. In doing so, the Boks became the first individual Test side to beat the All Blacks in New Zealand over a nine-year period.

Prior to the game, former Bok coach Nick Mallett said that the team would do well to lose by 10 points or fewer. Most agreed that Mallett’s comments were optimistic, considering the Boks had lost to the All Blacks 57–0 only a year before.

Nevertheless, the Boks hung on for what will go down in the annals as one of their great victories. The scenes that followed the final whistle spoke volumes for the achievement. Fly half Handré Pollard, usually not one to show emotion, lost his balance in the midst of celebratory leap. As the camera panned across the field of battle, it found one of the game’s heroes, Pieter-Steph du Toit, embracing teammate Bongi Mbonambi and openly weeping.

Surprisingly, it was Bok coach Rassie Erasmus who called for some perspective in the aftermath. The Boks were widely applauded following their 2–1 series win against England in June and after their resounding 34–21 victory over Argentina in Durban. Thereafter, however, the Boks suffered their worst-ever defeat to the Pumas in Mendoza, and failed to put a poor Wallabies side away in Brisbane. At the end of a taxing and challenging tour to Argentina and Australasia, Erasmus was adamant that his side still had work to do. 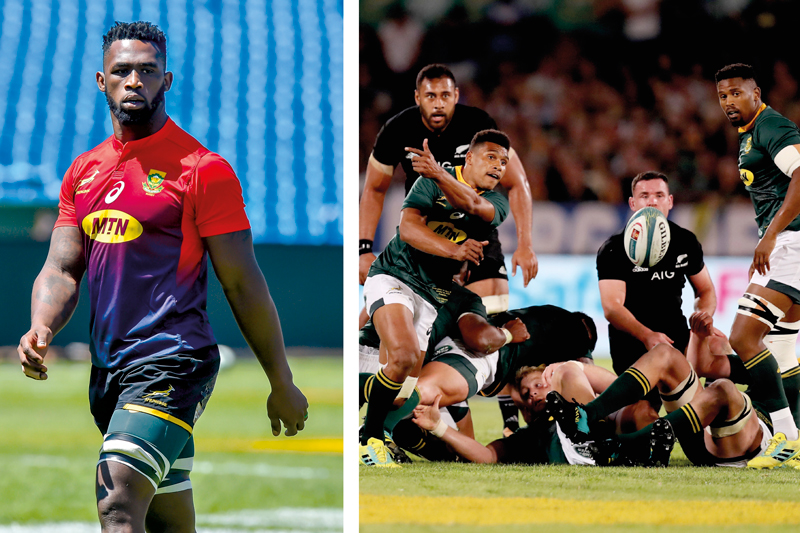 Indeed, when one considers the season as a whole, the Boks fired and frustrated in equal measure over the course of 2018. And while there is cause to celebrate the progress made by the side in some areas, it’s clear that the Boks aren’t yet a finished product.

Many of the players have commended defence coach Jacques Nienaber for his input and the strides the team has taken in this department. Consultant Swys de Bruin, who coaches the Lions in Super Rugby, has made an impact as far as the attack is concerned. What we saw in the matches against the All Blacks in Wellington and Pretoria was a move towards a more balanced approach.

The Boks are still short on experience, though. Erasmus made good on his promise to back a number of youngsters this season. He handed 19 players their Test debuts across the June Tests and Rugby Championship, and took the uncapped trio of JD Schickerling, Ruhan Nel and Sergeal Petersen on tour to Europe in November with the intent of giving those players game time.

The move to blood a host of younger players should benefit the Boks in the long term, as one would expect many of those players to feature some time in the lead-up to the 2023 World Cup. In the short- and middle term, however, Erasmus will need to strike a better balance between youth and experience.

The Boks may well have beaten the All Blacks in Pretoria – and scored consecutive wins against their traditional foes for the first time since 2009 – if they had produced a more composed and accurate showing in the second half. As it was, the inexperienced side leaked 26 points in the final half hour and allowed the All Blacks to snatch a 32–30 victory.

The South African Sevens side also delivered a mixed bag in what was a big year for the shortened version of the game. Neil Powell’s charges were duly lauded following their successful defence of the World Rugby Sevens Series title. They have cause to be disappointed, though, after finishing the Sevens World Cup in San Francisco with a bronze medal, and after crashing out of the Commonwealth Games on the Gold Coast at the semi-final stage.

The revamped Super Rugby tournament delivered more of the same as far as South African results were concerned. The Stormers and Bulls finished in the bottom third of the table. The Sharks were well beaten in the first round of the playoffs, while the Lions – who weren’t as well balanced as was the case in 2016 and 2017 – suffered their third-straight defeat in a Super Rugby final when they went down to the Crusaders in Christchurch.

Erasmus is South Africa’s director of rugby as well as the Bok head coach, and should be concerned by the underwhelming showings at Super Rugby level. One would expect him to work quite closely with the respective franchises on issues regarding performance and player management, as well as transformation, in the lead-up to the World Cup next September.

The Boks beat the All Blacks in Wellington. That result will ensure that they go into the game against New Zealand at the 2019 World Cup with some hope of success. The two rugby giants will collide on 21 September in Yokohama, Japan in what many critics have already billed the biggest clash of the pool phase.

Erasmus will be the first to call for perspective, though. A lot of work still needs to be done, at Super Rugby as well as Test level, to ensure that the Boks peak at the global tournament in Japan. 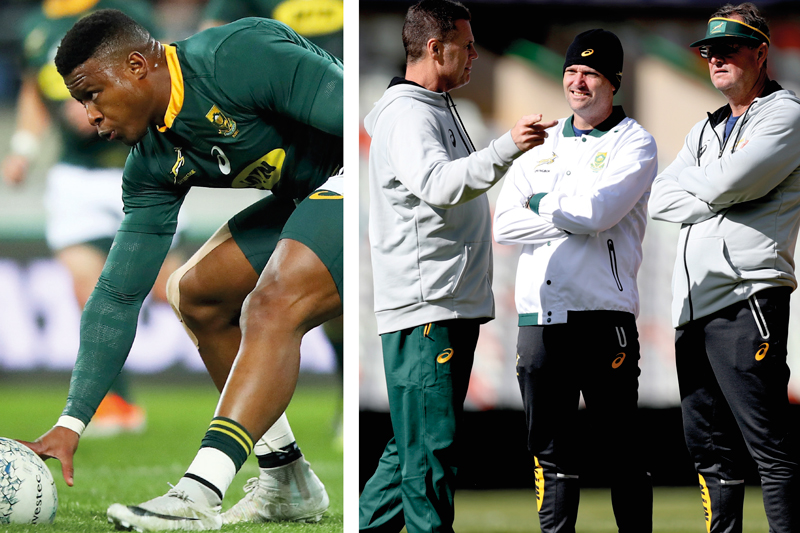 Who impressed for the Boks in 2018

Kolisi captained the Stormers and was also part of the Springbok leadership group in 2017. Rassie Erasmus elevated Kolisi to the position of Bok skipper in early 2018, and the move had a galvanising effect on the team. As a player, the flanker took his game to another level and was especially influential in The Rugby Championship.

Du Toit led a largely second-string side in the first game of the season against Wales in Washington DC. Over the course of the season, he shifted from lock to flank with outstanding results. Following an epic performance against the All Blacks in Wellington – a 24-tackle effort that spurred the Boks on to a rare win – the big man wept tears of joy.

It’s hard to believe that Dyantyi was relatively unknown prior to 2018. The winger excelled during his debut season with the Lions, and was subsequently brought into the Bok starting side. By the end of the season, the player hailed by many as ‘the new Bryan Habana’ had made his way on to the World Rugby shortlist for the Breakthrough Player of the Year award.