Siya Kolisi’s interest in rugby began, appropriately enough, with the 1995 World Cup in South Africa. He was barely four years old and he was beguiled by the haka of the All Blacks, which he would practise repeatedly. It was hardly in keeping with the habits of a Springbok patriot, and Siya’s allegiances shifted sharply in the ensuing years. Now, he not only captains the world champion Springboks, but has become a striking totem for South Africa to rally around. Today, his only involvement in the famous New Zealand war dance is staring it down.

Having led his country to World Cup glory in Japan, Siya has emerged as a giant in the South African consciousness. He endorses everything from veldskoene to underwear and is linked to several brands and initiatives. He’s even been wooed by Roc Nation Sports, Jay-Z’s high-profile sports-management company.

‘It’s been amazing,’ he says of his time back on home soil, travelling the length and breadth of South Africa on the Boks’ victory tour. ‘It’s been good to make people smile; they’ve embraced this thing.’

Siya’s humility is an important quality because – for all the happy chaos and celebration of recent months – he remains first and foremost a rugby player. He’ll still be required to pitch up at training and take his knocks. He is still expected to perform – perhaps now more than ever, given that he has set such a remarkable standard. ‘I can’t let that [success] define who I am. I’ll keep trying to get better. I just love playing rugby,’ he says.

The response to Siya hoisting the Webb Ellis Cup in November was universally positive. He was gracious and humble, and in post-match interviews he referenced his country’s poverty-stricken communities, acknowledging them on the global stage when so few ever do.

A month after the triumph, he did so again. Upon seeing an old Port Elizabeth acquaintance, a former policeman, begging and homeless, he went off and bought him lunch.

‘It’s shocking how lives can change. I’ve been there, when I couldn’t eat. There’s little worse than hunger. If I’m in a position to help, I must do so. I live every day to be the best I can be.’

Siya grew up in his grandmother’s home in Zwide township, just outside Port Elizabeth, where his ambitions stretched little further than securing a good meal. At night he slept on pillows arranged on the hard floor. His favourite toy was a brick. What nourished him was ‘love and support’. ‘All I wanted was to have a good life,’ he says, while  acknowledging that hardship made him stronger.

The portents were dark, though. His mother, who had been only 16 when she had Siya, died young. His father was away, working in Cape Town. His grandmother would later die in his arms. However, throughout his difficult childhood, Siya sought refuge at African Bombers, arguably South Africa’s best named rugby club. The brick had been replaced by a ball, and he thrived. His talent and determination soon stood out; people began talking and soon the scouts came calling. Grey Junior School offered him a scholarship with full boarding, a step up that was followed by a full scholarship to the prestigious Grey High School, an institution with a good track record for turning out professional sportsmen.

It was a turning point for the gifted youngster. He could barely speak English and therefore his academic performance suffered, but he was well liked. He and classmate Nicholas Holton worked out an arrangement: Nicholas would help Siya with his English; Siya would help him improve the little Xhosa he had picked up. It was a sweet deal, and the beginning of a long friendship. Years later, Nicholas would be the best man at Siya’s wedding. 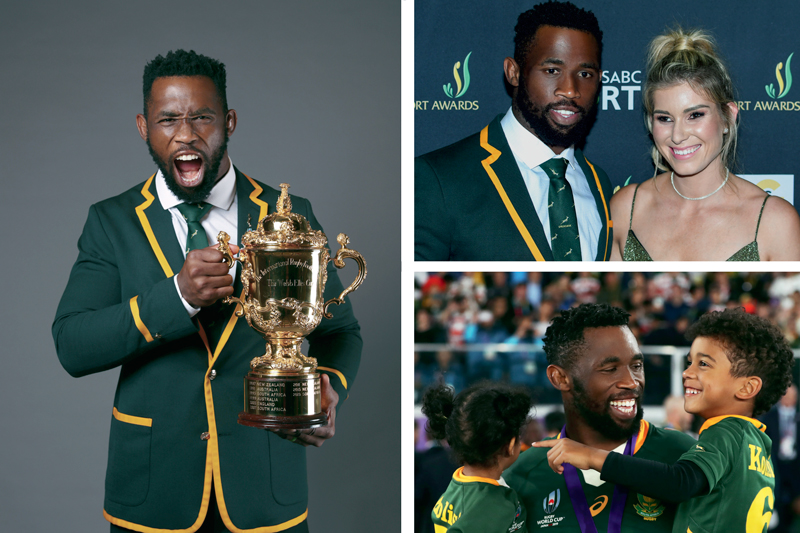 Siya was a happy and popular student, engaging in the usual banter and mischief that goes on at boarding school. One year, he arranged for his ‘new pot’ (a Grade 8 pupil he was assigned to mentor) to cover for him and a pal, who snuck out after dark. The new pot had to climb into Siya’s bed, pretending to be him during the housemaster’s nightly inspection. It worked and Siya presumably had a fun night off the leash.

Siya then barrelled through school. Boarding-house food agreed with him and the loose forward filled out quickly. He bulked up (earning the nickname ‘Bear’) and his natural talent was honed into exceptional skill. Provincial selection ensued, as did a call-up to the SA under-20 side. From there, Siya moved quickly through the ranks. A move to Cape Town followed, then selection to Western Province and, later, to the Stormers, where his understated presence earned him the captain’s armband.

His work rate and rugged tackling stood out and, in 2013, he played for South Africa for the first time. Five years later, Rassie Erasmus, who had handed him his first contract as an 18-year-old, asked Siya to captain his Springbok side.

It was a historic, spellbinding moment. He would be the team’s first black leader in its 126-year history; a powerful symbol of transformation within the game and a potent reflection of the country’s hard-won democracy. South Africa’s tangled history could have made it a difficult moment, but the warm response of the Ellis Park crowd was the best endorsement of all, as Siya led his team to victory over England that May. Eighteen months later, the team would triumph over England again, this time in a nation-unifying win at the World Cup final in Yokohama.

Siya is doubtless the man of the moment. Yet he is also the man of the future. At 28 years old, it’s reasonable to expect that he can lead South Africa’s World Cup title defence in 2023, assuming that his increasingly battered body holds up. Before then, however, there is the tour by the British and Irish Lions in 2021 that looms like another rugby Everest.

Yet even if life as a rugby player won’t fundamentally change for Siya, his day-to-day life already has. Every inch the A-lister, he is in high demand by sponsors, all eager to share in his World Cup stardust. There are meetings to be had and deals to be done.

It won’t settle down for a while yet, but Siya will gain perspective from his family. His wife, Rachel, recently posted a picture of Siya and his young children kissing the World Cup trophy captioned ‘My babies have no idea’. Meanwhile, Siya’s half-siblings Liyema and Liphelo, whom he adopted after seeking them out several years ago, are older and presumably fully aware of the scale of their brother’s achievements. ‘My family is everything to me; they keep me in check,’ he says. ‘I’m grateful that my wife lets me sleep if it’s a late feed or there’s a 2 am nappy change, but I do my bit later on. We are a team that way.’

His other team is the Stormers, with whom he yearns to win a Super Rugby title. His immediate focus is on doing so with the popular Western Cape side.

There is also still work to be done with the Springboks, their new ranking as the world’s number one rugby team notwithstanding. ‘I want us to get better and better, and to establish a winning culture. Winning the World Cup is the momentum we needed.’

When it’s put to him that life will never be the same again, he says in typically understated fashion that he isn’t so sure of this. ‘I don’t know, I really don’t know.’

He ought to, having become a hero to millions.