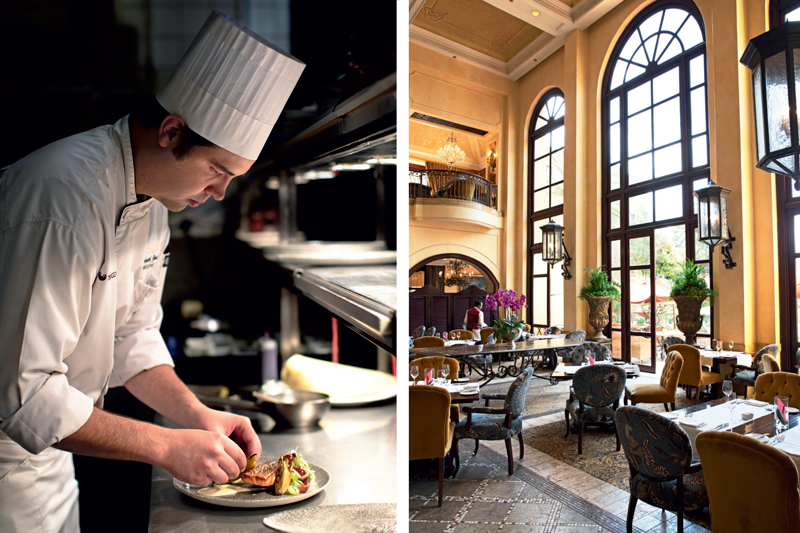 A chic oasis in the heart of Fourways, the Palazzo Hotel’s Italian restaurant, Medeo, has long been a favourite for celebrating the special moments in life. To commemorate its 20-year anniversary, the restaurant recently received a complete revamp. The new look is a study in sumptuous Italianesque touches infused with South African flair. Think elegant yet comfortable, opulent yet welcoming, with rich colours and textures such as golden velvets and large canvasses of birds in flight by Kirsty May Hall – a nod to the beautiful gardens and terrace waiting outside.

‘With our recent refurb, Medeo is arguably one of the most beautiful restaurants in Joburg,’ says Executive Chef Gareth Jordaan. ‘And with a platform like this, the food needs to fit the part.’ Along with the change in interior, the team also unveiled a new menu with dishes such as springbok carpaccio starter (with red-pepper coulis, Parmesan cream, parsnip crisps and pickled walnut); main courses such as pan-seared salmon (with cauliflower puree, grape, lime and vanilla salsa, charred fennel, beetroot) and truffle risotto (black summer truffle, goat’s cheese and Parmesan tuile); and desserts such as mango and coconut brûlée (mango gel, passion curd, toasted coconut and biscotti). ‘We want diners to leave Medeo with a piece of Tuscany,’ says Gareth.

As far as he can remember, Gareth has always loved Italian food, and more so preparing it. Some of his earliest memories are of spending time in the kitchen with his mom, an avid baker with her own chocolate business. ‘I remember grating cheese for pasta and mixing cake batter. My reward was eating cheese as I went along and licking the bowls. Spending time with her, cooking for the family, set my culinary foundation.’

The idea of cooking as a career was cemented at age 15 when his school required him to gain work experience. He was placed at a conference centre, where his first day began at 5 am cracking 30 dozen eggs, peeling four pockets of potatoes and chopping half a kilo of mint. This was followed by even more menial tasks, but Gareth wasn’t deterred. To the contrary: ‘The madness, the unpredictable moments and circumstances… I loved it! From then on my mind was set and I have never looked back.’

After graduating from LIS Hotel in Joburg with a diploma in Hospitality Management and Professional Cookery, he interned at the Ritz-Carlton resort in Naples, Florida. This led to a position as chef de partie at the resort’s five-star fine-dining seafood restaurant under Executive Sous-Chef David Codney. Of the many chefs who inspired Gareth in his career, he stands out: ‘David was very demanding, very much in your face, only wanted the best and the best was always his way. At first, I dreaded going to work knowing I had to endure a shift with him, but now I appreciate that he always made an effort and took the time to coach and mentor me. To this day when I prepare certain dishes, I still remember him.’ 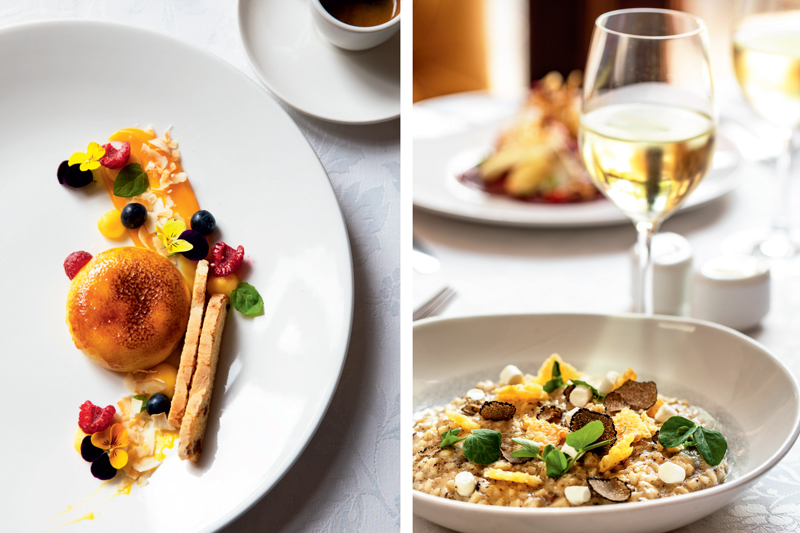 Soccer City and beyond

Upon returning to South Africa in 2010, Gareth took up the reins as sous-chef at the FNB Stadium during the 2010 World Cup, catering for more than 90 000 spectators. ‘It was probably the most stressful job of my entire career,’ he says. ‘A large number of the staff went on strike just before the opening match and we literally had to do everything ourselves. A nightmare moment was all our gas bottles freezing up two hours before kick-off. I’ll never forget hearing the panic over the radios. I found myself running around the biggest stadium I have ever been in with gas bottles over my shoulder. Luckily I was a lot fitter then. As a team we still pulled it off and at the end it was a humbling, once-in-a-lifetime experience.’

Before taking up the mantle as executive chef at Medeo, Gareth worked at various hotels in Gauteng, including the Balalaika Hotel, Faircity and Southern Sun Hyde Park. He also spent some time mastering the art of Italian cuisine and cooking for the rich and famous at world-renowned Italian restaurant Cipriani, at the Yas Island yacht club in Abhu Dhabi. ‘We had lists of celebrities and influential people moving in and out daily. Once, the sheik had all the ladies in his household joining us in the kitchen for cooking lessons.’

After honing his Italian cooking skills at Cipriani, his current position at Medeo felt like coming home: ‘Italian cuisine will always be a big influence on my cooking style. Authentic Italian food is so simple – with just three to four quality ingredients you have an amazing dish. The key focus is using the best available ingredients and not over-fabricating the dish. When it comes to cooking, less is often more. At Medeo, we have a humble approach and we don’t want to intimidate our diners,’ says Gareth. ‘We want to provide a warm, relaxed yet refined dining experience and for diners to leave with lasting memories.’ Even children are welcome (with a special high-tea menu just for them).

The wine list focuses on excellent, but affordable wines. ‘We are very fortunate to be supported by Tsogo Sun’s group sommelier, Miguel Chan,’ says Food and Beverage Manager Ainsley Williams. ‘Through him, we have access to wines the public doesn’t normally get, such as Cape Winemakers Guild and Nederburg auction wines. We have also been taking a stronger focus on spirits – from gins to vodkas and brandies.’

Attention to detail, variety, freshness, quality of produce, sustainability and seasonality are all key areas of focus for Gareth, who believes chefs have a social responsibility to bring about change: ‘There is currently a big emphasis on sustainability and our impact on the environment. We are seeing many people changing their diets in radical ways. I see a growing demand for veganism and making a change through adopting a plant-based diet. I look forward to implementing more 100% plant-based dishes on our menu.’

Outside of the kitchen, Gareth also became a dad two years ago. Being a father has changed his outlook on life and matured him in different ways. ‘I never knew I would be cooking so many meals composed of two-minute noodles, chicken pops and fish fingers in my household,’ he laughs, ‘but that’s just the way it is.’