Last year, James Khoza was elected the first locally born and -trained president of the South African Chefs Association, a non-profit organisation that has represented chefs, cooks and caterers at all levels since 1974.

Respected for his ‘exceptional work ethic, integrity, quiet confidence and wisdom’, James is the executive chef of Tsogo Sun’s Sandton Convention Centre (SCC). It is a position that sees him lead a team of 40 chefs who have to cater for as many as 5 000 people a day. While ensuring the smooth running of all kitchen departments to serve up to 1 800 breakfasts, lunches and dinners daily (with coffee breaks and cocktail parties in between), he also oversees staff training and meets regularly with Tsogo Sun management and clients.

So where does he find time to provide direction for SA Chefs’ various initiatives, including industry transformation and training the South African Culinary Olympics team? ‘I’ve become a diary guy,’ he laughs, adding that he has received ‘overwhelming support from the top down’ at Tsogo Sun, a patron of SA Chefs since its inception.

Looking back on James’s career, however, it’s plain to see that a ‘fetish for order’ has been present since the beginning, even explaining why he became a chef. ‘Born and raised in a township, I never considered cooking as a career. Men who cooked were looked down on – a stigma that is only now gradually lifting thanks to shows like MasterChef. But when
I was 18, I went to the Carlton Hotel to help my mother’s boss, an electrician, install fairy lights for a wedding. As we went through the kitchen, I saw all these men preparing food – and they were all wearing white, yet there were no splashes! I saw a whole new level of discipline, and I immediately knew it was what I wanted to do.’

James enrolled at Technikon Witwatersrand to study Food & Beverage Management. He also secured enviable practical experience at Linger Longer restaurant under Walter Ulz, but soon found that he didn’t enjoy the routine of doing only one thing every day. ‘Someone suggested hotels might suit me better, because there are so many different sections to work in, it would be impossible to get bored. In 1995, I moved to the Sandton Sun as commis chef, and I loved it. I often worked double shifts because I didn’t want to miss out when something interesting was going on.’

It wasn’t all plain sailing: ‘In those days there were plenty of militaristic-type chefs screaming unprintables and using bullying tactics. But I soon realised the screaming only happened when you hadn’t performed to the level expected. As long as you knuckled down, worked hard and were always prepared for the day ahead, instead of arriving unprepared, things would proceed smoothly.’

Those who noticed James’s can-do attitude included the late Dr Billy Gallagher, who was then group food and beverage director (and SA Chefs president, a position he held for 21 years before becoming honorary life president in 2003). As James recalls, Dr Gallagher was an inspirational leader: ‘He made you believe in yourself. As long as you worked hard, you could do anything you wanted to do. Needless to say, I was the guy who raised my hand every time he asked for a volunteer, so when he introduced TV cheffing to South Africa, I was lucky enough to assist him when he did his demos.’

Another mentor in the early 2000s was Sandton Sun executive chef Klaus Beckmann, who arranged for James to gain international experience at the InterContinental Berlin, where he worked at Michelin-starred Hugos for three years. ‘It was truly eye-opening. In South Africa, cheffing is all too often not a vocation. For guys recruited from the streets, it’s just a job, a means to an end. In Berlin, all the guys were motivated, they wanted to be there, they didn’t need to be asked anything twice.’

What impressed James most about Hugos was that there was no waste. ‘At many Michelin restaurants, they use one specific cut of meat and throw out the rest, whereas at Hugos anything that wasn’t used was sent to banqueting or used for staff meals.’

A year at the Paris Hilton came next, followed by eight-month exchanges in Singapore and Thailand. Then he worked for the government as an embassy chef, which took him to the Democratic Republic of Congo and Guinea. ‘I didn’t do it for long; I just wanted to explore different cooking spaces.’

However, when Dr Gallagher and Sandton Sun/SCC executive chef Garth Shnier approached him to run the SCC kitchens, initially he resisted, but agreed to give it a year.

Within the year, James made his mark – and he’s never looked back. ‘At SCC, we’re not afraid to break barriers. There’s no out-of-the-box concept that scares us. Whatever ingredients an event organiser wants, we can get. I think many hoteliers are envious of what we can do here.’

While James doesn’t micromanage his team, you’ll still find him in the kitchen every Monday, Wednesday and Friday. ‘I’m still a chef at heart, although “chef-businessman” is what I call myself now.’

‘President’ is what nearly 10 000 members of SA Chefs call him. ‘Over the past year, my first priority was to bring the association back to the members, with a lot of our sponsorship having dried up due to the economic situation, political uncertainty, Eskom challenges and so on. We’ve become more self-reliant, with membership fees as our main revenue stream, which has made it crucial to maintain and grow membership. Every chef must see value and feel heard and supported.’

In South Africa, where some 70% of chefs are semi-skilled and battle to break through the sous chef barrier, James sees SA Chefs as ‘a space for growth and development through training and mentorship’, where the aim is ‘to set and maintain the highest level of culinary excellence’.

Members are exposed to international food promotions, competitions, workshops, conferences and various other learning experiences, with SA Chefs’ educational wing falling under the Tsogo Sun Centre for Culinary Excellence, which was created in partnership with the University of Johannesburg and boasts a library, computer centre and state-of-the-art Skills Kitchen and Culinary Theatre.

‘This is where we fulfil our mandate of training, offering subsidised courses to members,’ says James, who points out that learning basic skills is no longer enough. ‘We need to be prepared for a future of automation and robotics. We also have to be more aware of the environment, as last year’s severe drought in Cape Town proved, pushing chefs to use produce that is less water dependent. We have to embrace what’s happening in our country and in people’s lives, whether it’s dietary requirements or demands for traceability. And it’s not only the guys at head office who must come up with ideas – we need to be creative ourselves.’

Speaking from Tsogo Sun Hotels head office, COO Ravi Nadasen says: ‘As his employer, we are delighted to offer James our full support.’ 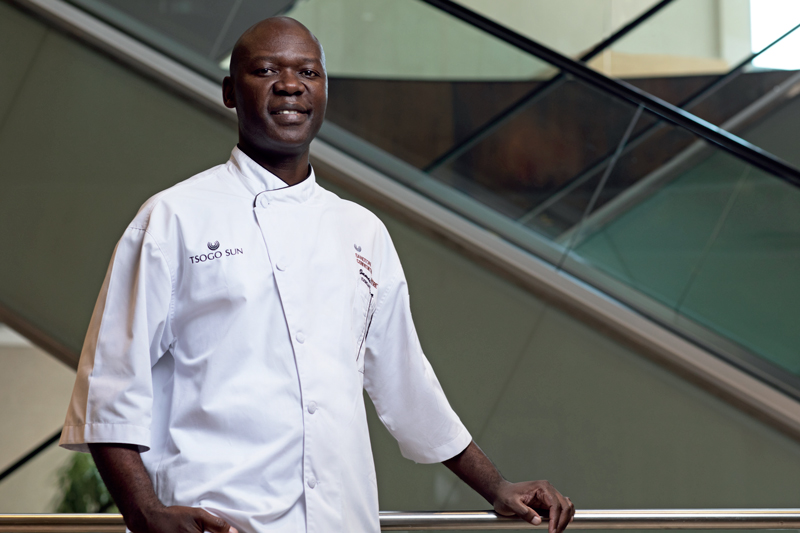